Well you'll all be happy to hear that Gracie and I buried the hatchet on Friday (not literally as neither of us could find one to bury) when we met up in the park after a torrential downpour. She did some grovelling, so I forgave her and now we are bestest pals again. Man did we have fun! Noone was around, so we took over the kid's playground and ran up and down the equipment. There are two small slides, a big one and a spiral one. Gracie and I were having such a blast, Gracie got confused and instead of running down the big slide, she went bounding down the spiral one! Boy that was scary - she sort of fell on her head. But it didn't phase her and back we went, both going down the big slide one after the other so that I landed on Gracie when I hit the bottom. We got awfully hot, so we both ran into a big puddle, sat down, wrestled and got full of mud. Ah, what a grand day!

But later my Mom got very upset when she turned on that damn CNN again. This time it wasn't something far away in the Middle East that made her heart lurch, it was a story about a shooting at a Jewish Federation building in Seattle, WA. Some man angry at the Middle East situation decided to take out his feelings with a gun on 5 innocent women who worked there. One was killed and four were badly injured. Mom also works for a Jewish Federation, so this story upset her greatly - she told Dad it could happen at any Jewish institution...I think I better start going with Mom to work - I would be able to sniff a deranged lunatic a mile away.

I've received so many kind emails asking about my itchies and offering all sorts of advice, so I wanted to post some new pics so you can see there is some improvement - granted my front paws aren't completely A-OK, but they are a lot less itchy:

Mom thinks the medicine did the trick. Boy those pills make me sleepy and ravenous...I've been eating like a horse and sleeping like a ........dog! Heh heh. Here I am dozing on my perch:

I have new friends to introduce to you. Meet Sammy, he lives in Blacklick, Ohio with his Mom Jean. Good to meet you Sam my boy! You sure look fluffy dude, and clean! Are you sure you're a wiry guy? Seriously, note everyone the very unusual situation evident in that photo - NO couch cover, Sammy is standing on the actual couch material. WOW!! A wire usually looks more like my bud Cody, pictured right! Heh Heh, Cody digs playing with the hose!

And then there is Daisy, what a sweet little bitch, and Mom of the very famous Canadian Colby featured often on my blog. Daisy has a very high pedigree, and lives with her mom Alexis, I forget where...maybe Canada? Daisy's best pal is Hamish the Sheltie, though she won't tell me if there is a romantic involvement there...

Finally, meet Buster - a fellow wire and a fellow blogger. Check out his blog called very humorously, The Wire Fox Terrorist. He's a funny chap, he is an expert in grilling and seems to enjoy doing beach jigs by the look of his funny photo below. His blog comes with this warning: "Do not be alarmed, I am a wire fox terrier and cannot help myself." 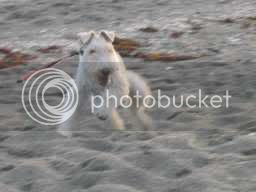 And now for an amazing story...animal related of course...it almost moved me to tears. Happy tears.
In a zoo in California, a mother tiger gave birth to a rare set of triplet tiger cubs but sadly they died shortly after birth. The mommy tiger started to decline in health due to depression, and the vets decided that if the tigress could surrogate another mother's cubs, perhaps she would improve. But there were no tiger cubs to be found anywhere so they decided to try something that had never been tried in a zoo environment. Sometimes a mother of one species will take on the care of a different species. The only orphans that could be found quickly, were a litter of weaner pigs. The zoo keepers and vets wrapped the piglets in tiger skin and placed the babies around the mother tiger. They wondered, would they become cubs or pork chops?

You be the judge. (Warning, the following images may result in strong reactions of verklemptness...)

Hey thanks for putting me in your blog. My Mom and I are trying to get one going for me. And by the way, you should look at my album again. Just so you wouldn't think I can't play with the big boys, I put my "mud picture" in. My Mom had to give me 3 baths to get all the mud out. My Pooch Park has a ravine and I'm always getting the big guys to follow me into the mud. It's fun. Sometimes their humans aren't too happy. Glad you're itchies are better. Soon....

Thank you for using a picture of me with fur! And I love the tigers and pigs in blankets!

Glad to hear you are feeling better buddy. I hate the itchies. My ears get itchy a lot and mom drugs me too.
My mom really has enjoyed the pictures of all the WFT's but she is puzzled and a bit disturbed by the pig in a blanket pics. Doesn't it make you wonder where they got the TIGER SKIN? Urgh!

I asked a friend of mine who used to work with monkeys at the zoo. They most likely come from cubs or tigers that have died. They keep them on hand when they need them. Camoflage, sometimes they will even wrap a hotwater bottle and clock in one for animals newly on their own to have fake companions - kinda like we do with puppies and blankets.

good to see that you are looking better! My right front paw looks a lot like your front legs. But the vet in Santa Fe said I was better now, and I don't want to chew any more! Be nice to your mom!

Mango and Party said...
This comment has been removed by a blog administrator.
5:39 AM

Great to hear that you are getting better! Keep those paws strong to type your wiry updates!

Hey, Ax - So glad you are doing better. Those itchies are hell! Don't know why we wires have this plague of itchies, but I guess it is because we are otherwise the most special of breeds!