Why Can't Humans Get Along?

I am feeling sad today. I am tired of the way humans treat each other. We dogs may have the occasional fight - but we don't wage wars or seek to destroy eachother. My heart goes out to Duke (pictured below) tonite. Duke lives on a kibbutz in Northern Israel. Today his human Dad David heard the bomb siren wail and instead of running to the bomb shelter, he hopped on his bike to go and fetch Duke so that he too could be safe with his master in the shelter. On the way, a rocket fell out of the sky on to David and he was killed. Now Duke is an orphan again - David had found and rescued him on the kibbutz. Duke stood in silence next to his dad's body until friends dragged him away. I know you will all join me in sending our condolences to Duke and David's human family. 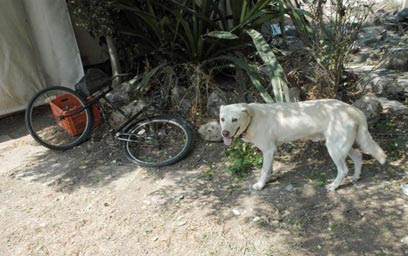 I also want to send best wishes to my pal Terence who had to have surgery yesterday due to a sudden diagnosis of glaucoma. Poor little guy had to have his one eye removed, so now he'll be a dashing pirate dog! Get well soon buddy, we're all pulling for you!

Do me a favor, click here and cast your vote for my pal George who is entered into a photo contest. George is a little behind - so don't delay! I'm not sure if we can vote multiple times, but I'm sure as heck going to try!!

I have to tell you, yesterday evening I had a rollicking good time with my bestest chick Gracie. Despite the 100F heat, our Moms took us to the fountain by the Art Museum. There we met up with many of our other friends, also out to cool off in the water. I swam and swam, Gracie tried to catch me and often did, dragging me out by my collar and dunking me under the water. We played fetch, chase and wet the Moms! It was good clean fun until Gracie pissed in the water! Heh Heh - I like my gals uncouth and uninhibited, but I was a tad grossed out!

Here is a picture of the fountain I found online - but that odd looking lady wasn't in the fountain when I was there yesterday! She would have freaked us out for sure! You see the perimeter around the fountain, I love running around up there and barking at everyone!

It's time to go chow, so until later,