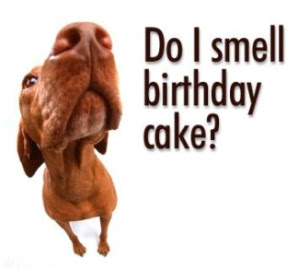 Before I update you on the showdown at the groomers who butchered my beautiful coat, I want to wish my dear Mama a very HAPPY BIRTHDAY! She is just over 5 in doggie years, so she is still a pup (She made me write that!).

Yesterday Mom went to the chain petstore (we don't want to tell you which one because we still like the store in general because they do good charity work for animals and we don't believe in besmirching someone's good name over one nasty incident) where I got horribly groomed last week. She was all fired up to meet the store manager and get some justice for us. The store manager to whom she had written letters and sent photos was not in, so she spoke to a nice woman named Krystal. Krystal listened and cared about what we'd been through. Mom and her then went to speak to Josie, the lady who lied to Mom or who at least lied by omission in failing to tell Mom that Melissa did NOT groom me, but some ill-experienced novice did the job. Mom reports that Josie denied lying but did admit that Melissa had not groomed me but she insisted that Melissa had been with the novice the whole time, showing him what to do etc. Mom wasn't born yesterday (see above for proof) - you have only to LOOK at me to know that Melissa could not have supervised my haircut. Mom told them straight that she didn't believe it for a second.

Anyway, yadda yadda yadda -- Krystal and Josie offered Mom 3 free grooming sessions and Josie added that SHE herself would do the job {shudder}! Know what Mom did? She laughed! I mean seriously, how can you offer my Mom free haircuts in the salon that did this to me and by the SAME woman who lied and caused this all in the first place. Mom entrusted me to Melissa - clearly and explicitly - they deceived her in letting someone else groom me (who didn't know what he was doing) and then not telling Mom that that is what happened. Not to mention that they made Melissa look bad by implying that she had groomed me and did a bad job of it.

Krystal promised Mom she'd ask the District Manager if he could do anything. We believe we should be compensated monetarily so that another groomer can restore my coat to its former glory. We wait and see what transpires, but Mom is not holding her breath.

On a happier note. Mom asked me for a birthday kiss today. I did not oblige, I'm not a licker type of dude. I never lick unless peanut butter is involved. So Dad told Mom a secret. That if she gently stuck her finger in my ear and held it to my mouth, that I would lick it! How did he find that out??? Mom tried it, and sure enough, I licked her fingers like an idiot. I fell for it! Eek!

PS Later today Krystal called back Mom. She told her she'd spoken to the district manager and all they were willing to offer us is a refund on my haircut or three free haircuts! Mom said she'd collect the former but would NEVER accept the latter, ever. We don't think this is good enough, but that's the end of the matter as far as I'm concerned.

Posted by Daniella at 6:16 AM 7 comments: Links to this post