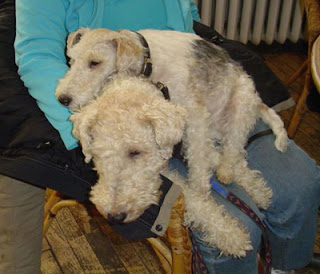 I'd like to introduce you to two very special friends, Bingo and Honeybee (that's Honeybee snuggling on top of Bingo in the photos, they love eachother very much). What makes them extra special is that they are survivors of Marc Andre Laporte's puppymill in Blainville. Forty other foxies who they lived with were not so lucky and did not survive the horror and neglect.

Yesterday these brave pups, met with a journalist from "Journal de Montreal" to tell their story in the hope that it will stop any of the ridiculous talk of Laporte getting his wires back! "Bing and Bee" as they are known, meet every week for "coffee" with their Moms Helene and Elizabeth G. It's a kind of therapy session for everyone. When the wires think of what they have suffered, they get very very sad. In fact they cannot bear to even think about going back to that life again. They are very grateful to all the humans campaigning against such a notion and appear on the blog today to beg you to sign the petition and write letters to Elizabeth Pierce on their behalf (119 16th Street, Roxboro, Québec Canada H8Y 1P1). And speaking of their friend and protector Elizabeth Pierce, here is a photo of her with Honeybee. 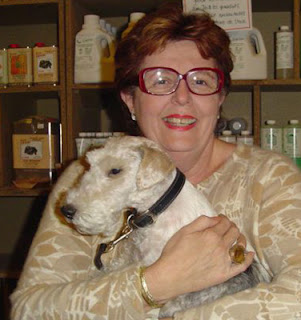 All the foster moms explained to the journalist how excruciatingly difficult it was caring for Bingo and Honeybee after they were rescued - they had so many scars from their life with Laporte, it took so much love, patience, medicine, training and effort to nurse them to health. One thing they pointed out to the journalist was that most of the rescued wires have/had conjunctivitis and some are blind because they had lived their little lives in the dark at Laporte's puppy mill.
Can you imagine? I, Axel G, am afraid of the dark, I do not like to go for walks when its dark out, so I shudder to think of what those wires endured living 24/7 in the darkness.

Bingo's Mom told me that when she first acquired Bingo (after one foster family gave up on him), he could not be taken outside! He yelped non stop and at first she had to carry him and put a blindfold on him. One day she lost patience and yelled at him to be quiet, and believe it or not, he responded. After that breakthrough, he made giant leaps of socialization.
"He is so happy now!" she tells me, "He likes old people and children the best. He has other dog friends. He still doesn’t understand toys and if a job is too difficult he easily gives up (eg. a Kong with a cookie that doesn’t come out, gets left there). "

Sometimes she says, he stresses and starts to “make circles”. And not surprisingly, he has nightmares! He sleeps in his Mom's room, in her bed, and when he starts crying and yelping she tells him it’s ok and he calms down.

"I think I have a harder time with his beginnings that Bingo does. There isn’t a day that goes by that I don’t think about the hell he lived in. " 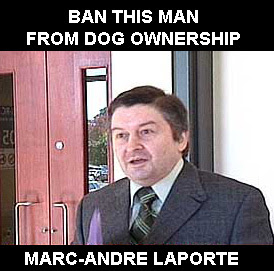 Well, friends, there is no doubt about it, Bingo is one lucky chap to have found such a great home and Mom. Can you just imagine Bingo having to leave this loving home and return to Laporte?! No we can't either and we won't allow it to happen!

Our story has now hit South Florida thanks to the valiant efforts of my Florida pals Jake and Just Harry. Ellie Brecher, general assignment reporter, best known as the Pet Lady for The Miami Herald, blogged about our Laporte campaign after being notified by the Barkalot Boyz and their Mum J1. You can see it here: http://miamiherald.typepad.com/crazy_for_critters/
Well done chums - hopefully all the Montrealers vacationing in Miami will see it!