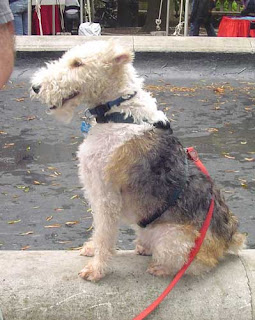 Today Mom and Dad took me to The Carnivale of the Dogs in Rittenhouse Square Park. We went a few years ago and it was fun, so we decided to go again. I'm not too fond of crowds and gatherings of little dogs, especially little dogs dressed up in ridiculous costumes, but it was kinda fun. One thing I remembered from last time was the big pond in the middle of the park, so I immediately pulled my humans in that direction and jumped up on the ledge. Imagine my disappointment - NO water! Someone stole the water!!!

That's me at left smiling, but actually I'm just in shock that all the water is missing!!!

I tried to hide my disappointment, but it wasn't easy. Many people came up to us to enquire what breed I was...got some new guesses today -- Is that a Lakeland terrier? Is that a Dandy Diamont terrier? I mean please!! Do I look like I have pom-poms on my ears? The silly enquiring lady said she thought I was a Dandy cos I look a bit like a sheep!!

We only spotted two other terriers, a Scottie and a Bull Terrier. The rest were those very irritating tiny dogs like teacup things and a zillion Yorkies. Yeah, I know they are terriers, but I think they need to be reclassified as toy dogs! 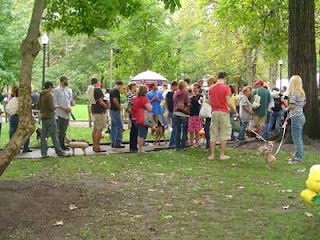 So we walked around, Dad enjoyed the free hotdogs and drinks; and I got plenty of treats. As we were leaving a lady came up to us and told us to come on over to the church across from the park for the blessing of the animals. Mom embarrassed Dad and Me by asking if the service was non-denominational because "our dog is Jewish!" The lady said that indeed it was for dogs of all faiths. So we went. 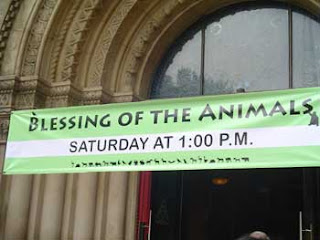 The priests were very kind and humorous. Father Neale spoke about his beloved terrier who had lived for 15 years and died in August. 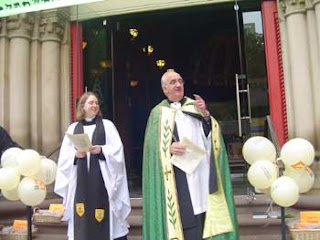 I liked him very much especially as he was kind enough to have one of my nicknames enscribed upon his very impressive robes: 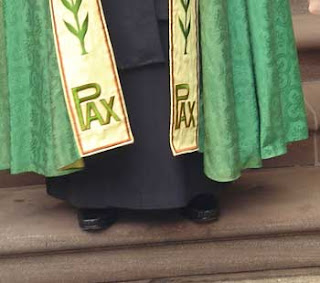 So prayers were said and hymns were sung and at one point they mentioned Jesus and Mom gave Dad a dirty look as if to say, "non denominational my ass!"
We then had to come forward and Father Neale threw water over our heads - that was a tad confusing since the only time people throw water on my head is when I lose my head in the park biting other dogs! There was also a very strange animal in the crowd, I'd never seen one before, Mom said it was a hedgehog! He was a very prickly guy...bit of a weird pet if you ask me! 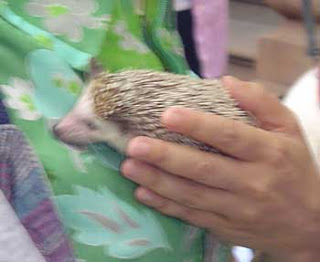 So I am now a blessed dog - and it feels pretty good!

Posted by Daniella at 7:57 PM 8 comments: Links to this post