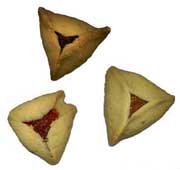 Today is the Jewish Festival of Purim when the Jews of Persia (now modern day Iran) were saved from destruction (it was the earliest attempt at a Genocide - the destruction of a genus, a people). During the time of King Ahasuerus, one of his ministers, Haman, sought to destroy the Jews in revenge for being snubbed by the Jew Mordecai, who refused to bow down to him. With the king's authority, he draws lots (purim) to determine the fateful day, which falls on the 13th of the month of Adar in the Jewish calendar. Learning of this decree, Mordecai approaches the new queen, his cousin Esther, to intercede with the king. Esther, who has not revealed her Judaism publicly, fasts for three days in preparation for this task. At a banquet for the king and Haman, she denounces the evil Haman, who is eventually hanged.

Anyway, like all Jewish festivals, Mom says you can summerize it in a few words:
They tried to destroy us, we won, let's eat.

I especially like that last part, and I still have high hopes that Mom will let me celebrate Purim by sharing a hamantashen (pictured top right), which is a delicious triangular cookie filled with jelly. I am by contrast hoping she won't make me fulfil the other part of Purim which is dressing up in costume. I hope she forgot where she put my cow costume that I wore on Halloween. Mom told me she misses being in Israel on Purim where it is one long day of festivity, dressing up, and well, drinking. Can you believe you are obligated to get drunk on Purim so you don't know the difference between Haman and Mordechai? Thankfully Mom and Dad aren't drinkers... I don't think could cope with that!

Yesterday I was out in my yard with Dad, enjoying the warm weather and contemplating digging up the new bulbs that were blooming, when Rex the neighbor stopped over and chatted with Dad over our shared fence. I was astounded to hear him complain that I bark too much. Moi? How bizarre. I only bark at noises - dogs, car doors slamming, people chatting outside MY window, dogs barking, and Rex's own cat who loves to tease me by sitting right in front of my window. So I bark a bit, does it really hurt anyone?

To my shock and awe, Dad didn't even try to defend me - he readily admitted that I was driving THEM nuts too. He apologized. And then Mom came out and she practically grovelled with apology! I'm not too impressed. Anyway, to keep them from taking any dire action - like crating me again - I was a good boy and kept quiet all night. It obviously paid off, my clever strategy, as this morning I overheard Mom telling Dad she'd bought me a new collar online, called an anti-bark collar. Not sure what that means, but I think it means I get it as a reward for NOT barking! So now I'll be looking out the window for the mailman to bring my new collar! Woohoo! Almost makes me want to bark! Heh heh.

Posted by Daniella at 1:41 PM 3 comments: Links to this post