All I got was a cow tail!

So wait until you hear this! Talk about injustice! Every so often Mom meets up with Aunty Lynne and her friend Sheila and they get together and bake, often experimenting with new recipes. So this week, they decided to do pies again, rich and decadent ones!

Mom opted for a Chocolate Marshmellow Pie made from Hershey's almond chocolate, heavy cream, marshmellows and graham cracker pie crust. It's only about a zillion calories. Here are photos of the ingredients in the pot and Aunty Lynne making funny faces. Mom could kick herself, she didn't take a photo of the finished product, she just managed to take a photo of the last slice, that was saved for Dad. Me, I got NOTHING. Not even a lick of a spoon. 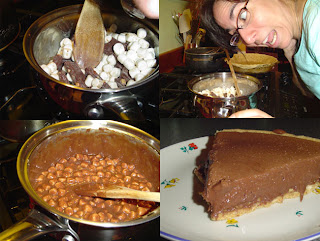 Aunty Lynne made a chocolate banana pie and Sheila made and peach/cream cheese pie. Don't they look delish? Do I need to point out again that I got NOTHING, again?
Not even a taste...I mean peach and cream cheese isn't chocolate, I don't get it!

Is this an injustice or what? Dad was even complaining when he saw his slice. He had the temerity to wonder aloud why he didn't get the whole pie! Dad is not given to exaggeration, most of the time when asked if he likes something, he responds, "its ok." So for him to say the chocolate pie was AWESOME, means I really missed out. Mom took 3/4 of the pie to work and her co-workers gobbled it all up and asked if Mom was taking orders! Mom smiled and gave them the recipe - "knock yourself out," she said. Mom confessed to me she didn't even dig the pie - she hates Hershey's chocolate and would frankly rather have toast and Marmite than a slice of chocolate pie....yeah, she's PSYCHO. 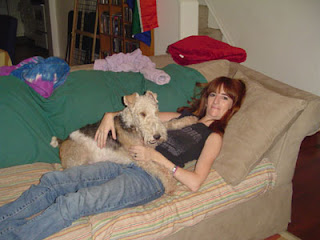 When I sit on my little Mom, she can't move. LOL I weigh almost as much as she does. She should eat more chocolate marshmellow pies.

To make up for this scandal - leaving me out of Pie Night - Mom came home with a new chewy for me. A delish stinky cow tail! I really enjoyed it, look how I was savoring it... 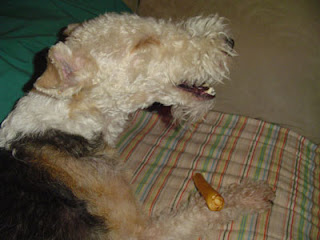 It ain't chocolate marshmellow pie, but it was a tasty treat!

Finally, very delighted to report that my pal in England, Master Jackson Sullivan, is well on the road to recovery. He had 22 staples out today and didn't even flinch! What an inspiration he is!

Mom and Dad are watching the Olympics for a change...so that's my cue to go for a nap. Here I am snoozing on Dad's pillow on the couch... 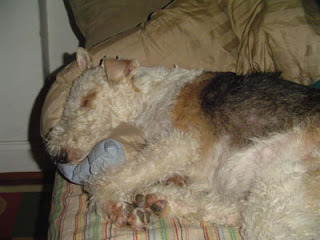 Posted by Daniella at 5:11 PM 6 comments: Links to this post