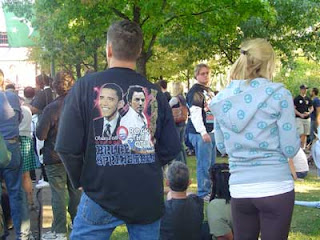 Mom tells me she is stealing blog time from me to report on todays Free Bruce Springsteen/Obama rally on the Ben Franklin Parkway in Philly. Mom went alone since Dad and I went to see Dad's parents and we went for a nice walk and swim in the Pennypack Creek Park, even though it was a bit chilly. Ok, over to Mom...

I decided I couldn't miss the historic free Springsteen concert/rally today so I walked there this afternoon. I'm not sure how many people were there, probably over 20,000 and the atmosphere was one of great hope and longing for a change in November. I must say, at some point, while Bruce was singing The Rising, I got all choked up. I felt very much like I did back in South Africa in 1994 on the eve of the referendum to decide whether SA was ready for change, for an end of Apartheid. Hope was so huge then too amongst most South Africans, it was palpable eventhough we knew the referendum was a farce (only white people could vote - Yes for Change; No for status quo). The result was an overwhelming YES and thus SA was set on the path to non racial democracy and free/fair elections.
I hope too, that in November, Hope and Equality, Decency and Good win out as it did in SA.
It was amazing living through one peaceful revolution. Is it too much to hope to live through a second on November 4th?
Here are photos from today's rally/concert. Bruce totally rocked! I couldn't get very near - ironically I sat under the Pakistan flag! 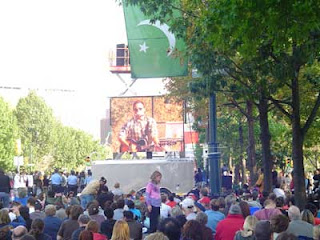 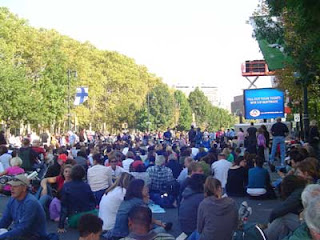 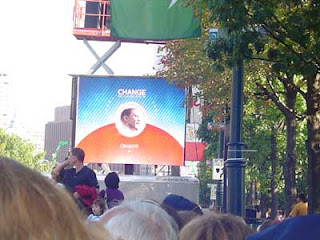 Posted by Daniella at 5:01 PM 6 comments: Links to this post