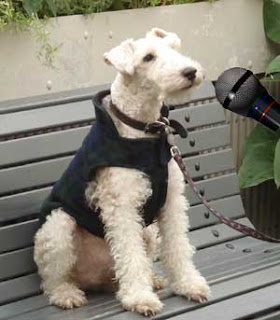 Two days ago, on April 8, Marc Andre Laporte, convicted abuser of over 100 wire fox terriers, had his day in court. I turn my blog over to Bingo, survivor of Laporte's House of Horrors, who attended the hearing, and renders this report:

Greetings from Quebec - my name is Bingo Mayer, and I am coming to you LIVE from the courthouse in Saint Jerome, where my former owner and abuser, Mr. Laporte, today faced Judge Sirois. Today the learned Judge, stated on several occasions, that he WILL NOT under any circumstances remit any of the remaining Fox Terriers that survived the kennel of M. A. Laporte. This INCLUDES any of the “red collar” dogs that were picked out from the bunch by Mr. Laporte back in November 2005 at the time of his arrest to be returned to him for breeding purposes. The judge expressed his disappointment that Mr. Laporte has not recanted his claim to those dogs.

The prosecution today requested a fine, 4 or 5 years probation during which time he would not be allowed to keep ANY animals, community service, and a substantial donation. At least that is what I understood. [Of course, if a Wire like me was sitting in judgement, we would sentence him to life in prison, to a cell with no toilet and little food and water. We believe he deserves to be treated as we were treated by him!]

However, friends, remember the judge MUST sentence according to CANADIAN LAW…(not moral law). Canadian law states that animals are considered PROPERTY - therefore, the defense requested that Mr. Laporte have his “property” returned to him AFTER he has served his time. The prosecution, in turn stated that, since the “property” that was confiscated by police was used in the commission of a crime (animal cruelty, of which Mr. Laporte has been found guilty), then he is not entitled to that property, any more than a convicted felon would not be entitled to reclaim his or her cocaine or gun confiscated from a crime scene.

The final outcome was that the judge wishes to investigate the jurisprudence on this point of law before making his final decision on May 6 so that it CANNOT BE OVERTURNED on appeal. All things considered, the outcome was positive, given Canada ’s antiquated laws (dating back to 1892).

This is Bingo Mayer, signing off and reminding you all to be good to yourselves, and to be good to your animals. I was unlucky to endure time with Mr. Laporte, but I now live very happily in a loving and wonderful family. I am truly blessed. Goodbye.

Thank you Bingo for that illuminating report. We will check in with you again on May 6, when we hope Judge Sirois will have found some legal precedent for making sure Laporte cannot reclaim the red collar dogs EVER.

Posted by Daniella at 8:27 AM 10 comments: Links to this post