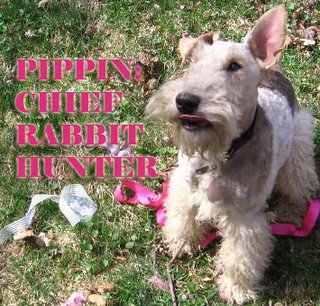 (As related by his Mom Pat)

Late Saturday evening, actually Sunday morning, Pippin demanded to go out. He was absolutely insistent, adamant about going outside.
Perhaps he really has to pee, I thought, So I put his collar on and opened the door.

He sprang out like the devil was after him. Barking furiously, he ran off towards the woods. I heard a commotion, branches breaking, jaws snapping, a yelp, and a high pitched squeal. Abruptly, the air was still. I ran out to see what had happened. Quivering in excitement, Pippin stood over the inert body of a bunny.

Not just any bunny, but the Easter bunny! I scooped up the mighty hunter and ran back to the house. I tossed him in and yelled for Judy, telling her that I feared the Easter Bunny had been murdered by Pip.

I ran back out, now equipped with a flashlight.

Within 2 minutes, Judy was outside and inspected the lifeless bunny. She had a spray can in her hand. She shook the can and sprayed the rabbit.

I wanted to ask what she was doing, but she held her hand up, indicating that she wanted quiet.
Nothing happened.

Again, she shook the can and sprayed the rabbit. The nose twitched weakly. Judy aggressively sprayed the bunny, she emptied the entire can on the rabbit.

Suddenly the bunny leapt up off the grass, grabbed the empty basket and scampered off into woods.

HAPPY EASTER....AND TO ALL MY WIRY PALS - HANDS OFF THE EASTER BUNNY (AND ALL BUNNIES IN FACT...OTHER THAN HOT DOG BUNS).