What a beautiful day...and you won't believe what happened to me!

Dad and I were out on a walk in our familiar park surroundings when Dad sees a couple and a dog in the distance relaxing by a bench. As we got closer, Dad realized the dog was another Wire Fox!! We went and introduced ourselves and met Henry, a year old wire from Harrisburg, Pennsylvania. They were here on a weekend visit. It's always nice to see a fellow wire, but I was in one of my aloof moods...so the humans chatted for a while and then we continued on our way.

At the time, Mom was at the supermarket doing her weekly chore, when Dad had the brilliant idea of taking a photo of Henry and Me and sending it to Mom's cellphone. So there was Mom, perusing toilet paper in isle 9 when her phone rang. She thought it was Dad to remind her to buy something - but instead up came a photograph entitled, "me and my wire friend Henry". Mom was most confused, and when she realized what was up, she was most disappointed to have missed meeting Henry. 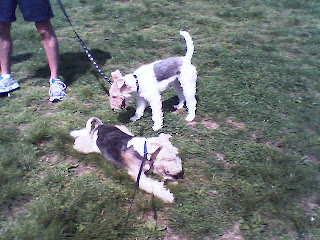 I'm the wire with the black saddle. Henry was mostly white. 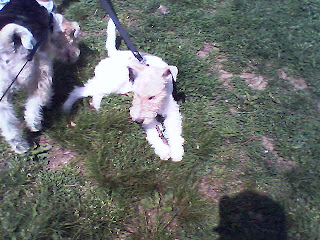 When she got home, she interrogated Dad - who were they? how old was Henry? did we play? Was he stripped? where were they staying...poor Dad. Mom can be relentless when it comes to meeting other Wire foxes!

Tomorrow it's just me and Dad all day as Mom has to work at some big event - I don't see why I can't go with...but Mom says her work colleagues would not be impressed to have me along. Humpff!