IT IS OFFICIAL: NO DOGS FOR LAPORTE! 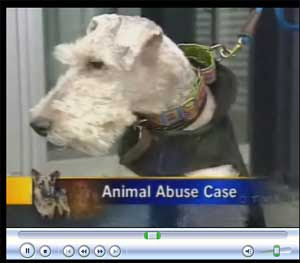 I had wanted our friend and Laporte survivor Bingo to give us his report - but he is out celebrating and I was too impatient to share the good news!

Judge Sirois sentenced Laporte to 200 hours of community service (the maximum by law is 240), plus a fine of $2000. He will serve THREE years of probation during which he is NOT ALLOWED to own a dog. The best news is that the so-called Red Collar Dogs (the 18 wires Laporte still owned and wanted returned so he could breed them again) are safe. The Judge severed Laporte's ownership rights and said he would send him to jail if he contacted any of the foster families. To see the video in English that reports on the case's outcome - click to:
http://montreal.ctv.ca/cfcf/video_popup?news_id=21840

There you will see my friend Bingo (I'm almost sure that is him in the black coat - also pictured top left) and I think there is a glimpse of Honeybee too. And our dear friend and savior, Elizabeth Pierce is interviewed too.

Oh Happy Happy Days my friends! Though we would have liked to see Laporte banned from dog ownership for life or sentenced to hard jail time or the electric chair - the Judge handed down the most severe sentence he was able according to the Montreal law. It is indeed more than we could have ever hoped for.

Thank you to everyone for signing the petition and supporting out cause against Laporte. It's been a 3-year struggle, but we were victorious in the end, for the just always triumph my friends, and evil gets what it deserves.

Posted by Daniella at 2:16 PM 12 comments: Links to this post